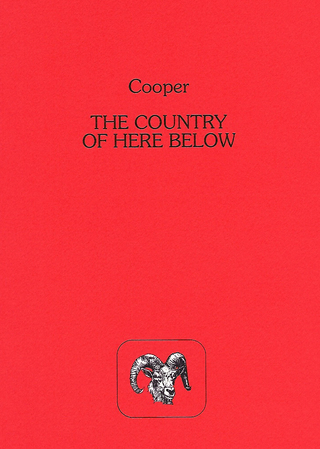 The Country of Here Below

“Poet Wyn Cooper made Utah his home as a college undergraduate at just about the time he began to write poetry in earnest; but though his first book of poems reflects a sensibility as shaped by the desert landscape more than almost any I have encountered, these are no campfire poems. In fact, rather than abandon in his poems the often frightening urban landscape of the Detroit where he grew up in favor of a desert wilderness, Cooper finds the two not incompatible and combines them in ways that are both moving and eerie.”


I can hear it moving through the night,
Wheels on tracks on dirt still warm,
A straight line west through two more valleys
And a slow turn north, then two full days
Beyond the border, into Canada.

Here the air is colorless, but filled
With other things: coyote in a trap
Far away, now silenced by the train,
Aroma of sage released by dew
And dew itself, cool on cool bodies

About to rest, as the train will rest
In another country, the coyote dead,
Sagebrush burning in the summer sun.
That same sun will wake us soon,
Before we are ready, without a sound.

We do not move but know the earth does,
Through black and silent space, describing
An ellipse again and again. We do not speak
And fall slowly to sleep, perfectly still,
Stars burning and falling over our heads.

Mars Poetica
“There is a staccato quality to Wyn Cooper’s poetry that I admire, as if the words have been pried out of him. The poems’ brevity and short phrases become telegraphic. They give his language a sense of urgency, but nothing is hurried. The poems move forward thoughtfully and gracefully as they bear witness to the world’s fragility and to Mr. Cooper’s own.” --Stephen Dobyns
Chaos is the New Calm
"Wyn Cooper explores an overlooked territory that lies between the crafty irony of Frank O'Hara and the more unalloyed sentiments of contemporary popular culture."
--T.R. Hummer

Postcards from the Interior
“Wyn Cooper’s superb postcard poems, deft and exemplary, say just enough, and never too much.”
--Jane Hirshfield
The Way Back
“Wyn Cooper’s poems are tight and pithy and fun.”
--James Tate
The Country of Here Below
Wyn Cooper’s first book, which includes the poem that was made into Sheryl Crow’s song, “All I Wanna Do.”

YouTube interview with Tim Green for Rattle
Words and Music: Three Stories
Wyn's essay on how three of his poems were turned into songs.
Poets.org: Wyn Cooper: A Serendipitous Career
Academy of American Poets essay on Wyn Cooper's music
Loading…}